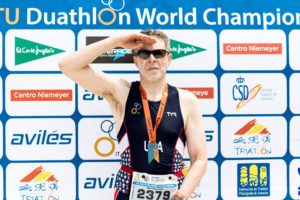 Paul had an amazing year in 2016. In addition to numerous age group wins in the local running series both on and off-road, Paul was 6th at the ITU Duathlon Worlds in Aviles, Spain on June 5th and was 4th in age at the USAT National Championships in Standard Duathlon distance in Bend, Oregon only three short weeks later. We’ll be cheering him on at the Penticton ITU Multisport World Championships in Penticton, British Columbia in August on 2017. 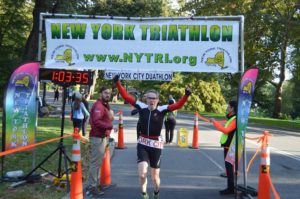 Ranked as the top Duathlete in Connecticut and first also in the Northeast Region by USA Triathlon, Paul is well known on the racing circuit. Having ridden and raced his way around the world, he’s looking forward to competing in the USAT’s Duathlon Nationals in Bend, Oregon in June and in the ITU Duathlon World Championships in Penticton, Canada in August.

His favorite race strategy quote is one from Mike Tyson: “Everyone has a plan until they get punched in the mouth”, Paul’s racing strategy is out of the chute full-on. The past few years we’ve dialed in various aspects of training using the latest technology including a BSX Insight muscle oxygen sensor, the STRYD power meter for running and software applications including TrainingPeaks, Golden Cheetah, Trainer Road, and Best Bike Split, and also a trip both to a wind tunnel and to an atmospheric chamber to test sweat rates. Paul is a committed, strong, elite athlete who is going to continue to dominate in the running and duathlon scene, and we’re excited to be a part of his training!

CZC Athletes Have Been Up to Some Really Cool Stuff!!

Want to learn more about becoming a CZC athlete?